On February 18th, North Branch Works brought together developers and real estate brokers for a roundtable discussion about the future of development in our service area along the North Branch.

If you missed the State of Development along the North Branch, you can watch it here. And the power point presentation can be viewed here.

Infrastructure and transportation upgrades for new and existing businesses and the need to support the existing mixed-use environment emerged as major themes during the panel discussion.

Several specific infrastructure projects were discussed including the coming reconstruction of the Division Street Bridge, reinstating CTA Bus service on Elston and Clybourn Avenues, and plans to build a transitway connecting the Central Business District and the North Branch.

Panelists also emphasized the importance of the area continuing to attract new businesses while supporting existing ones to sustain the area as a great place to work and do business.

North Branch Works will continue to fight for our member businesses including industrial businesses, provide timely updates about the development projects featured in the webinar, and push for these crucial infrastructure upgrades.

If you haven’t already, it’s a great time to join North Branch Works as a member. We’ll connect you to grants, information about low-interest business loans, and companies in our network for business-to-business opportunities.

We can also provide customized support for businesses and nonprofits.

Last week, the Chicago Plan Commission approved plans to redevelop the Morton Salt facility, sending them to the Committee on Zoning, Landmarks, and Building Standards for the next review.

A well-known landmark on the North Side, Morton Salt has long occupied a 4.25-acre property located on the west bank of the Chicago River running south from Blackhawk Street on Elston Avenue.

Led by developers R2 Companies and Blue Star Properties, the project will turn the site into a mixed-use office, retail, and entertainment complex, including a community-based venue and events space that can accommodate up to 3,000 people as well as future uses such as a farmers’ market.

The so-called Salt District will add approximately 285 permanent jobs and 41,500 square feet in new office space that will attract new businesses to our service area.  Just as important, the project will support the Goose Island manufacturing district east of the property.

It’s a great example of a dynamic, adaptive reuse project that supports neighborhood jobs and wealth creation by converting a vacant riverfront property into a jobs center. 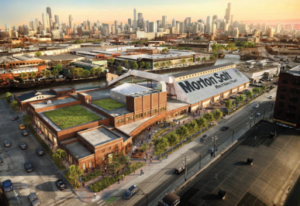 Morton Salt is expected to keep its research and development team on-site, moving into a newly renovated office of 20,000 square feet.

In our discussions with the developers, we’re pleased they have expressed interest in working with surrounding businesses to ensure a seamless transition into the neighborhood.

And the project will make it easier to get around the area by adding separate riverfront trails for people walking and biking. These paths will eventually connect to a new pedestrian bridge over the river at Blackhawk Street that’s in the North Branch Framework Plan.

The trails will also create easy access for people on foot and bike to the Wild Mile Chicago, a 17-acre floating park coming to the North Branch Canal. The paths at this development will over time connect to riverfront trails at Lincoln Yards that will run between North and Webster Avenues.

Getting to the Salt District on bike will be relatively easy thanks to the bike lanes on Elston Avenue. And if you’re coming from the west, you’ll be able to get within a quarter mile of it by using the 606/Bloomingdale trail.

The project will also add a water taxi stop and a boat launch.